The Modern Buildings in New York 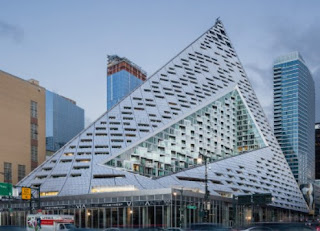 The Modern Buildings in New York Perhaps the most Instagrammed building of 2016, Spanish architect Santiago Calatrava’s $4-billion transit hub quickly became synonymous with the rebirth of the World Trade Center site. Replacing the mall that was destroyed on 9/11, the spindly structure offers over a hundred retail spaces, plus a breathtaking “oculus” that filters light down to the acres of white marble.

For his first New York building, daring Danish architect Bjarke Ingels conceived an enormous apartment house (with 709 units total) with a striking pyramidal silhouette. Located at the western terminus of 57th Street—otherwise known as Billionaire’s Row—the edifice has been described, fittingly, as a “courtscraper” thanks to the lush oasis of green space that occupies the central courtyard.

This 19,000-seat arena catapulted architecture firm SHoP into the design-world stratosphere and created an icon of the new Brooklyn at the same time. Boasting a signature weathered-steel skin, the state-of-the-art structure is home to the Brooklyn Nets as well as the New York Islanders, plus it regularly hosts concerts by the likes of Janet Jackson, Jay-Z, and Ariana Grande.

Designed by Dattner Architects with WXY, this government-owned salt shed in Soho fittingly resembles a salt crystal, with its angular shape and blue-tinted concrete façade. At 6,300 square feet, the warehouse can hold up to 5,000 tons of salt, which the Department of Sanitation utilizes during wintry weather.

At the northern tip of Manhattan, Steven Holl conceived an elevated athletic compound for Columbia University, where he also teaches architecture part-time. Comprised of concrete, steel, and sanded aluminum boxes, the game-changing structure offers some 50,000 square feet of space for meetings, conferences, workouts, offices, and studying.