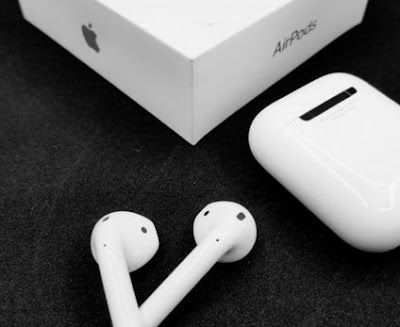 Fast fashion site ASOS sells knock-off Apple headphones that don’t even play sound. Apple’s AirPods have become a favourite among scurrilous counterfeiters producing low-quality knock-offs, but a new twist on the design sounds like it could be the worst yet.

Fast fashion e-tailer ASOS has started selling fake wireless headphones that don’t connect via Bluetooth, interact with Siri or — crucially — play any sound. The product’s care instructions recommend not getting them wet, which is probably the one specification they actually share with the AirPods.

The $12 “faux headphone ear piece in silver tone” is really just a piece of jewellery that retains none of the technology of the design it imitates, and it doesn’t even do all that great a job there either.

The all-zinc earpiece bears only a passing resemblance, but that could very well be all you need. Since being launched in 2016, AirPods have become a huge hit for Apple, forming a vital part of its wearables business.

Apple’s wireless AirPods have had a significant surge in popularity since they were first launched. The business, which includes AirPods and the Watch among other products, has recently become a key contributor to Apple earnings.

Earlier this year, Apple CEO Tim Cook told investors the wearables business on its own was bigger than more than half the companies on the Fortune 500.

But despite the AirPods success, they weren’t initially popular.


Many thought the design was weird and wouldn’t catch on, and that those who did buy them would quickly lose them.

Critics were right about the loss predictions. New York’s public transport operator revealed earlier this month it had considered telling commuters not to fiddle with their AirPods when stepping on and off the platform because too many were ending up on the tracks.

However, predictions that AirPods would be unpopular missed the mark. The stem-and-bud design Apple introduced has transcended technology to become a status symbol, a signal of wealth and, evidently, a fashion statement.

GQ Australia editor Mike Christensen said it was only a matter of time with so many products on the market. “Luxury fashion houses have released their own smartwatches and even collaborated with Apple on accessories for a few years now,” he said.

Some of those include Louis Vuitton’s Tambour Horizon smartwatch using Google Wear OS (starting at $4075) and the Hermès x Apple Watch collaboration (starting at $1999).

But according to Christensen, these tech-fashion crossovers need to rely on more than their looks to get by.

“While Apple has long been an industry leader in creating tech you actually want to be seen carrying, the best thing about their AirPods is not that they look good — it’s that they play music,” he said.

“Quality tech is expensive — and no disrespect to the good folks at ASOS — but not sure the solution is to create a pair of faux AirPods that don’t actually do anything. So unless you want to spend your day awkwardly telling people that, yes, you’re wearing new headphones and, no, they don’t actually work — we’d probably pass.”

The Apple AirPods were announced alongside the iPhone 7 in 2016, which did away with the traditional headphone jack. Some might be reluctant to reveal the dummy nature of the earpiece though.

ASOS is selling the piece, which is sold as a singular pod rather than pairs, as a form of privacy protection, tweeting they’d be “handy when you don’t want anyone to talk to you”.

The AirPods have become an undoubtedly popular device for Apple, and may even one day approach the same cultural significance as the company’s original white earphones that were bundled with the iPod.

The jury is still out on whether a non-functioning metal replica can achieve the same cut-through. Fast fashion site ASOS sells knock-off Apple headphones that don’t even play sound.